Changing a URL for a column in phpMyAdmin

Hello, this might be a very basic question but I would be really thankful if anyone could let me know isn’t this working.

Someone helped me put together a PHP application to be used as a backend for my app. From the web front end I can simply add thumbnail images, a video preview and it shows in app frontend. When we click on the thumbnail, it loads the preview video in next activity which basically fetches the same video which is linked with that thumbnail. Problem is that this video loads very slow, even though I have a fast hosting service etc. When playing around with phpMyAdmin tables, I found this (Image Attached) 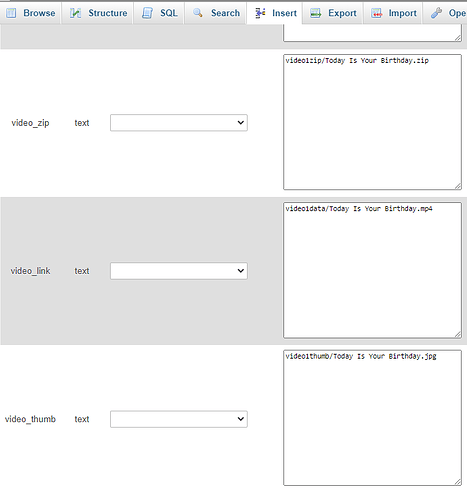 After taking a closer look, I was hoping if I could replace the video URL with , say Amazon S3 video url, it would simply fetch the video from the S3 bucket and hopefully the video will stream faster. However, when I replace the Video Link with the Amazon link, nothing happens, no video is played on app end. I tried the same thing with the JPG thumbnail URL, replaced with an external URL with .jpg extension and the thumbnail never showed up in app frontend.

Thanks in advance guys

How big are the video files? Are you using a dedicated server or a shared server system? Amazon S3 probably won’t speed it up much. There are a lot of possible reasons it is slowed down. Are the video links set up as a normal <img tag? If so and if the videos are stored on your server, it would be slow for two possible reasons. A slow server, like one of the free ones out there, or a very large video file which might take a long time to buffer. Not sure if this helps, but, maybe you should explain your code a little more…