Can someone please explain me why there is an error? 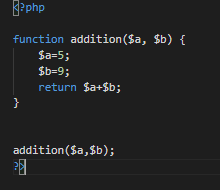 Basically there is nothing wrong with that. But, it does nothing. ( You did not send anything into the function. ) I will explain functions a bit.

First, the $a and $b variables in your function are LOCAL variables only. They exist only INSIDE the function itself. You set up a function like this:

Also, you return a value. This is assigned to the function name itself. So, in your example, to actually do anything with the results, you would need to do it this way:

$ernie=8;
$idontknow=13;
echo addition($ernie, idontknow);
**** In this example, the $ernie is placed into the $a in the function. It is NOT the same variable as any $a in the rest of your code. The $a, $b in your function is for that function only.

Hope this helps. By the way, there is a way to make the $a and $b a GLOBAL variable, but we will cover that another time…